The Feynman Technique Of Learning 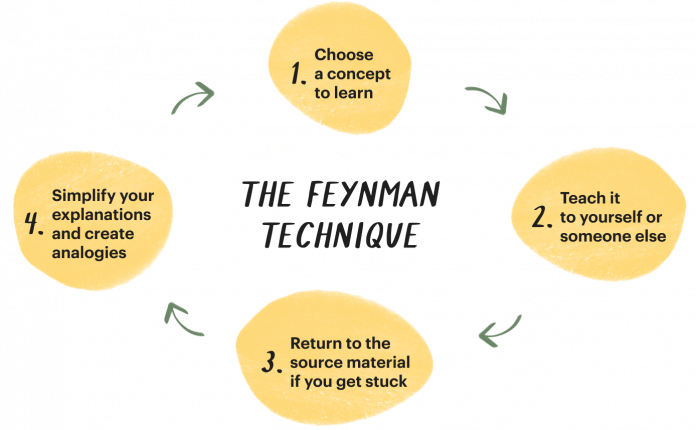 Students come across multiple processes and techniques of learning in their life. Some are provided by the school ERP, some are uploaded and suggested by teachers in the LMS, and some methods are self-taught. One such notable technique for understanding and quickly learning anything is the Feynman Technique.

Do you look at teachers and wonder how they can remember so much about a subject? Students think about it often and ultimately concluded that having years of experience and having to explain the same topic over and over again to different batches of students makes them an expert.

The reason why teachers find it easier to remember so much information is not only because of repetition but because they somewhat use the Feynman technique. Feynman is a similar technique of learning, where students can try to explain a particular topic to themselves just like a teacher does by using simpler concepts or ideas.

A lot of books have definitions and formulas in a very complicated language. These definitions can be simplified by using simpler words and easy-to-understand language. But simplified versions of them cannot be written down in an examination because examiners need some keywords to assign marks, and these keywords might not be available in simpler forms. Hence students can use the technique to understand information, break down a definition and still use the original sentences or keywords written in the book.

Named after the Nobel laureate Richard Flynn, a popular physicist, the technique gained popularity due to its usability. Learners find it useful because every subject can adapt the technique and help students from different fields of knowledge. Originally, the Nobel laureate had said that this technique is meant to broaden the perspective of a student beyond the subject because its simplification encourages further learning and understanding.

How to use the Feynman technique

The first step is a personal review and checking on the area in which the student wants to get better. For example, if a child has difficulty in understanding the laws of thermodynamics, they should not the various keywords in dynamics that need simpler forms of explanation. They can write down the broken down terms so that they remember not to miss these points and their respective explanations.

No one tries to adapt different forms of learning as a first step. Possibilities are that a child has already mugged up the information but is unable to understand it, or has made attempts in understanding the topic but has failed. In the process, they have some idea about the concept already, although not exceptionally or clearly. This idea can help them further in framing their new learned knowledge, with the help of already existing current knowledge.

Read Also: How to build your career as an Ethereum miner?

After the student has attempted to explain the topic in a detailed manner, we might have missed out some points. These amount up to the gaps in explanation. Students often need help in understanding where they are lacking, and to help them with this teachers and parents are always ready. Even if they are attending online classes, LMS features allow them to be continuously in touch with classmates and subject teachers.

The last step is to write down new things that students have learned by simplification and breaking down a topic. If they don’t immediately write it down, re-explain it or revise it, they might forget what they have learned. Writing down is the best way to keep things in our heads.

For complete accuracy and precision, students can try to get their notes checked by a teacher so that they approve the method using which they have learned something and the notes that they have derived by self-learning. Besides making a subject easier, the Feynman technique can make a student confident and self-reliant.

Teachers can introduce the Feynman technique in classrooms so that students can figure out learning things by themselves before they ask for help. The technique is not only about learning, but also about establishing and reconstructing ideas of subjects and topics.