How Cold Can Ants Survive?

Ants are a species of insects found in most regions of the world except in areas with exceptionally low temperatures. Scientists estimate that there are more than 12,000 species scattered around the world with some well-known examples such as acrobat ants and carpenter ants. Ants have a close evolutionary association with insects such as wasps and bees. Several facts about ants are as famous around the world as their social nature. Ants have developed some adaptations that distinguish them from other insects and allow them to thrive around the world but disappear from the scarecrows like Ever pest control tools which produce ultrasonic noise at a very unbearable level to them.

Ants’ Behaviors In The Hot Zones

You find food where others perish.” This is the life credo of the “silver” ant Cataglyphis bombycinus. It is perfectly adapted to survive in the scorching hell of the Sahara…

The sun rises in the cloudless sky and roasts with full force into the Sahara sand. The mercury on the thermometer climbs to fifty degrees Celsius. Even the most resistant of this hell disappear and wait in the shelters for the early evening cooling. For just one creature, the coming midday heat is the signal to leave the cold underground. Hundreds of small, about a centimeter long, silvery-colored Cataglyphis bombycina ants climb out of the anthill corridors as if on command. Their lizard archenemies were driven out of the dunes by the heat. So it’s safe outside. At the same time as the fire is growing, the hope dawns on the ants that they will come across a creature that was not fast enough in escaping from the heat and pay for its laziness with its life. That is their prey.

Ants must be fast. They go outside when the temperature rises to 47°C and must return to the nest before the air heats up to more than 53.6°C. Maximum temperatures reach 70 °C in the Sahara, and this is too much even for “heat-resistant” ants. Therefore, they only have ten minutes to go for food. In order not to waste even a second of precious time, ants rely on perfect solar navigation. Thanks to her, they always find the shortest way to the safety of the colony.

They are also adapted to the Hell of the Sahara in other ways. For example, they have longer limbs and use them to keep the body away from the hot sand. When running at full speed, they lift the first pair of limbs above the sand and run on only the second and third pairs of legs. They thus reduce contact with the heated substrate. To a casual observer, ants rushing at a speed of about 70 centimeters per second may appear like silver drops of mercury flowing swiftly across hot sand.

The ants are already in the nest preparing for a trip to the solar oven. They produce special proteins known as heat shock proteins. These are a common part of the defense of many organisms. Earth life forms produce them to eliminate the consequences of severe stress, for example, to heal the damage caused by high temperatures. But the Saharan ant is unique in that it produces these “healing” molecules in advance, even before it is even exposed to extremely high temperatures.

Relative Coolness In The Heat

Swiss and American scientists have now discovered a unique cooling system in the ant Cataglyphis bombycinus, the principles of which could be applied to the cooling of various machines, buildings, and even clothing. The top and sides of the body and head of the Cataglyphis bombycina are covered with silvery hairs. These have a triangular cross-section and very well reflect a substantial part of the spectrum of solar radiation, including waves close to infrared wavelengths. It is the reflected light that gives ants their silvery coloration. More importantly, the reflected radiation does not hit the surface of the ant’s body and heat it.

It is not the unique feature of the hairs on the body surface of the ant Cataglyphis bombycinus. They also excel in thermal radiation and are very efficient in transferring heat to the surroundings. The heat that is not reflected by the hairs and that warms the ant’s body is then lost again. We experience a similar cooling effect when we get out of a warm bed in the morning to the normal temperature of the bedroom. The surface of our body warmed up under the blanket to a significantly higher temperature than the surrounding area. Therefore, the heat passes from our skin to the surrounding air and we feel significantly colder than the temperature on the thermometer. At that moment, we lose half of all thermal energy through thermal radiation.

Scientists were especially surprised by the breadth of the spectrum of wavelengths of radiation that affect the hairs on the body of the ant Cataglyphis bombycinus. Despite the simple structure of the bristles, their cooling effect is truly admirable. If the ant did not have its silver hair, its body temperature would rise by 5 to 10 °C. And that would have fatal consequences for him during most stays outside the anthill.

A team of scientists from the American Columbia University and the Swiss Universität Zürich is now trying to imitate the body surface of Saharan ants with different materials. They place a lot of hope in the so-called metasurfaces. These are formed by differently arranged structures of nanometer dimensions, which allow changing the properties of the surface also concerning the amount of reflected and radiated heat.

The successful inspiration of silver ants Cataglyphis bombycina made the scientists hungry. They look around for other inventions of evolution. The animal kingdom offers a plethora of strategies for sensing and using electromagnetic radiation. For example, deep-sea fish inhabiting the world of eternal darkness can distinguish not only obstacles but also prey with their eyes. 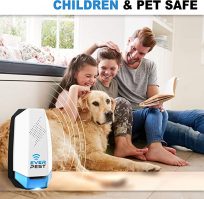 Butterflies often achieve an amazing play of colors on their wings without the help of color pigments. They use the fine structure of the wing surface to create color effects. Bees and many other creatures perceive both ultraviolet and polarized light. Fireflies, in turn, have developed a perfect system of communication using flashes of light. If you would like to take advantage of the cold season to eliminate ants in your apartment, check out https://everpest.com/blogs/blog/how-to-get-rid-of-ants-in-the-kitchen to learn how easy you can get it done without any stress.